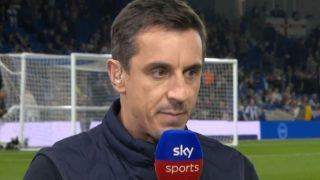 Manchester United face a fight to qualify for the Europa League this season, despite Jose Mourinho talking about the top four and securing a Champions League spot.

That’s the view of Gary Neville, backed up by the Reds not winning any of their last three Premier League matches following a disappointing 2-2 draw against Southampton on Saturday.

United are currently seventh in the table – eight points behind Tottenham in fifth – and face Arsenal on Wednesday night at Old Trafford. Dropping more points between now and Christmas may see Mourinho’s out of the race for top four.

Neville recorded the latest episode of the Gary Neville podcast after watching Spurs lose 4-2 at Arsenal, and he said he thinks Mourinho’s side have a lot of ground to make up on their rivals.

It’s going to take a run of wins to get back in with a chance of a strong finish and United look a long way off accomplishing that.

Neville said, as per Sky Sports: “If you are Manchester United, where are you at? Watching them on Saturday against Southampton they look a million miles away from that [Arsenal and Tottenham].

“United are in a massive battle to get into the top four, even the Europa League places at the moment.”

Of course, a win over Arsenal on Wednesday night will put United back within touching distance but our lack of consistency remains a huge concern. A win could possibly be met with more points dropped at the weekend against bottom place Fulham.

“Manchester United have to prove, more than they have so far this season, that they can compete with this Arsenal team,” Neville continued.

“Old Trafford is always a difficult place to go, so it wouldn’t surprise me if Manchester United won on Wednesday night, however they will recognise they have had a warning today from Arsenal.

“No team should now be shocked about how Arsenal are going to play in big matches in the future.”

Wednesday night will be United’s most important game of the season so far. Bottle it and more will be calling for Mourinho’s head.