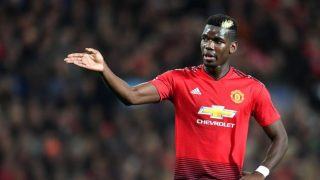 The team below will set up in a 5-3-2 formation when United haven’t got the ball, switching to a 3-5-2 when the Reds have possession.

Each week it goes without saying. The best goalkeeper in the world and the sooner we sort out his long term future, the better.

Tough game for the 19-year-old. Only made his Premier League debut at the weekend and this is going to be a massive test.

Just to set the record straight, this is a predicted line-up feature. Now a preferred XI piece.

The more I watch McTominay, the less I think of him as a United player. Often looks lost at this level and doesn’t bring enough quality to the table. He was mediocre against Southampton at the weekend and Arsenal have players to exploit his many weaknesses in this role.

It sounds like he’s going to be the only recognised fit centre-half, so it’s a must that the Argentina international starts. He’s not started a game in many moons, therefore, his selection will have Arsenal’s attack rubbing their hands – as will most of United’s defence.

His first name might be Nemanja, but he’s no Vidic. We’ll leave it at that.

The only consistent performer in our defence this season.

This Arsenal side has a bit of bite about it with new signing Lucas Torreira in midfield. Elbows will be given orders.

If Paul Pogba is that much of a ‘virus’, as Mourinho said according to the Daily Record, then Mourinho should show some bottle and leave him out of the team. Mata can bring creativity to midfield.

Options are scarce and Mourinho clearly doesn’t trust Fred. Herrera carries out instructions well and is always up for the occasion at hand.

Romelu Lukaku appears to have picked up a knock in the draw with Sunderland after stumbling over one of his terrible touches of the ball. Rashford needs to learn how to finish his chances and now is a good time to start.

It was harsh to drop him at the weekend. He’s been our best attacker this season and warrants a place in the team before many of the rest. United win if Martial shows up.