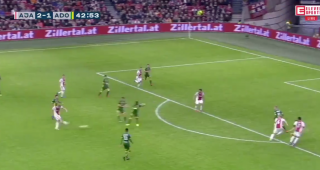 Matthijs de Ligt did his reputation no harm in the Eredivisie on Sunday, as he continues to be linked with some of the biggest clubs in European football, including Manchester United.

The Express cite a report from Catalan daily Mundo Deportivo saying Ajax have set a substantial asking price for De Ligt, costing United or another linked club in the region of £57.5 million.

De Ligt, 19, is regarded as one of the best central defenders coming through in European football at the moment, therefore should be on United’s radar given the current squad’s lack of quality defenders.

Ajax also have Frenkie de Jong operating as a creative midfielder, with the Catalan newspaper also claiming he’d cost £66 million, so the Dutch giants are in the money if any of Europe’s elite come knocking next summer.

After qualifying for the knockout stages of this season’s Champions League though, Ajax shouldn’t be pressured into selling any of these players in the January transfer window. And that will give interested clubs a chance to see these players in action against other big clubs.

Anyhow, back to De Ligt, who continues to show exactly what he is attracting interest from not only United but Barcelona, who are believed to be confident of securing his signature next year after meeting with the player’s representatives, as per Bleacher Report.

The young Netherlands international scored a quality strike against ADO Den Haag from 25-yards on the brink of half-time. Ajax went on to win 5-1.

He is primarily renowned for his defensive attributes, but this latest strike underlines just how talented he is in attacking positions also.

Check out the goal below via Twitter. It’s bound to get more people talking about the talent coming through at Ajax.

He’s just put Ajax 3-1 up with this… 👇 pic.twitter.com/CEQ8PxCwAx