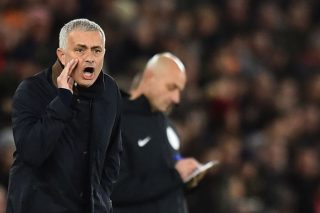 Jose Mourinho reportedly got some feelings off his chest in the wake of Manchester United’s shocking draw at Southampton.

The United boss is said to have accused the midfielder of disrespecting his teammates and the club’s supporters with the nature of his performance on Saturday.

Pogba’s display was nothing short of pathetic and Mourinho has every right to feel agitated by the Frenchman’s performance. The United academy graduate returned from Juventus in 2016 to make a mark, though he’s only worked hard to make sure his marketing wheel keeps spinning.

According to Duncan Castles of the Daily Record, Mourinho called Pogba “a virus” during a post-match dressing down. In front of the entire United team, Mourinho is quoted as saying: “You don’t play. You don’t respect players and supporters. And you kill the mentality of the good honest people around you.”

That’s a pretty clear description and it would make you think it’s been bubbling for a while.

But why is Pogba performing so poorly? His concentrate levels are non-existent and it’s not as if he’s contributing defensively or in attack.

The Daily Record report goes into greater detail with statistics: “Statistically, the Frenchman was dispossessed eight times by opponents, lost 15 of 30 duels and completed less than 85 per cent of his passes, a poor return for such a technically gifted midfielder.”

The excitement his signing brought quickly diminished. Under Mourinho, Pogba has been unable to take United to the next level and it may be time for the club to look elsewhere by cutting their losses with the France international.

Meanwhile, it would be a good idea to also get rid of Mourinho to give most players a clean slate, as long as the next manager is allowed to make the squad his own. Not just for two seasons but with a long term view to play attractive football.

United are in desperate need of wins in order to secure Champions League football for next season. Carrying passengers, such as Pogba, will cost us, and Mourinho picking more battles in the dressing is not going to help.