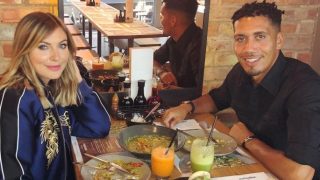 It seems like more people are turning to veganism and we have at least one of them in the Manchester United dressing room.

Chris Smalling was influenced by his wife, Sam Cooke, to become vegan and sounds like he’s enjoying his new lifestyle.

He eats porridge for breakfast with a mixture of fruit and may opt for avocado on toast.

Smalling also makes sure his protein shakes before and after training are vegan. He explains how spaghetti bolognese was his preferred pre-match meal, which is still the case albeit as a vegan equivalent.

The United centre-back says there’s a lot of curiosity surrounding the lifestyle, especially from teammate Paul Pogba who is intrigued to learn how Smalling keeps getting stronger.

Veganism is not a new concept, but it has certainly been receiving more attention of late. We hear of more celebrities turning to the lifestyle and that naturally influences other people to investigate and give it a go themselves.

Vegans chose not to consume dairy, eggs or any other products of animal origin, in addition to not eating meat like vegetarians.

Does it sound like something you’d like to try? I can’t say I’ll be trying it anytime soon after getting in the key ingredients for our Sunday fry.

Watch the video below or catch the full interview on BBC One at noon.

Chris Smalling is living that vegan life! This, and plenty more on today’s #FootballFocus. Tune in on @bbcone at noon! pic.twitter.com/HO0yCoJDwp