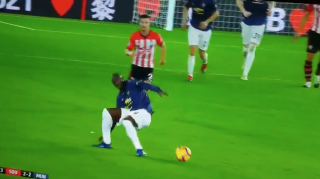 Romelu Lukaku is often slated for having a poor first touch and one heavy attempt to control the ball almost saw the striker suffer a nasty injury.

The Belgian international had a decent performance against the Saints, scoring United’s first goal to make it 2-1 after Mark Hughes’ men went two goals ahead in the early stages.

But people are still likely to make fun of Lukaku after another woeful first touch saw the front man floored and needing medical attention.

Thankfully, it wasn’t too serious and he came back onto the pitch wanting to continue.

READ MORE: (Video) Lukaku ends goal drought by pulling one back against Saints

The scoreline is currently level at 2-2.

i can’t even with lukaku 😂 pic.twitter.com/bY0kjupEcF