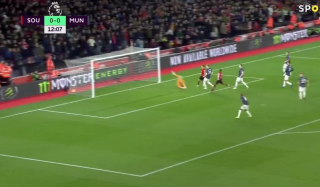 Southampton have a two goal lead at St. Mary’s.

Despite several chances to put a tackle in none of the United defence budged as the Saints went on an attack. The ball then found former Celtic man Stuart Armstrong who hammered the ball home for Southampton’s first.

Republic of Ireland international Michael Obafemi was allowed to stroll past United players for fun. Nemanja Matic and Marounae Fellaini let him into the box before the damage was done.

Of course, we knew before the game that United’s defence was a mess but these are professional footballers are more is expected of them.

Now the Reds trail 2-0 against a relegation battling side.

Their second goal came from a class free-kick by Cedric Soares.

The truth is we’ve been far too slow in our approach. Whether it’s winning the ball back or getting forward, there is no intensity whatsoever from Jose Mourinho’s men.

You watch other sides that press high up the pitch… They don’t give their opposition seconds to think, but it looks so much easier to play against this United side.

Can the lads force another comeback?

Watch both goals below.