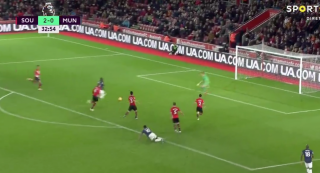 Romelu Lukaku has fired Manchester United back into the game.

While the scoreline is currently 2-1 in Southampton’s favour, United have pulled one back before half-time.

That is exactly what manager Jose Mourinho would have hoped for as his side conceded a second through a world-class free-kick.

If the Reds can go on to win this game it just may buy Mourinho more time in the Old Trafford hot seat, though we can’t keep going into games like this.