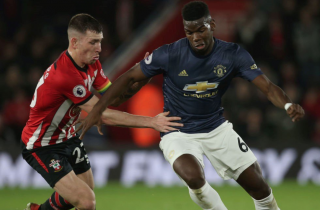 Nothing he could do about the 2 first half goals. Dealt with everything that came at him in the second half superbly.

Not commanding by any means, but better than I expected when I saw his name on the team sheet.

A commanding defender he’ll never make, but it was his least worrying shift as a defender in a United shirt.

Solid throughout, without ever looking troubled at the back, or threatening going forward until injury forced him off.

Did fine work in pressing the Southampton midfield to help United build up vital momentum.

It turns out he’s quite poor wherever he’s used in a Utd shirt. Again tonight, as he’s done in many games recently, he’s made the ball look like it’s harder to pass than a kidney stone.

His entire shift had me humming that Chilli Peppers classic Give it away! Either end of the pitch he was a danger to us.

Vital assist work in both goals that got United back on level terms. Needed this after giving the ball away and then committing the foul that looked to have given the game away.

A fine finish to get United back in the game when all looked horrifically lost. His energy levels were noticeably higher, but this just highlighted that his touch is still clumsier than trying to unhook a bra wearing boxing gloves.

Busy but not really involved in the game.

Busy but suffered from United not really doing much to push for a win once he was on.

Did some jogging. That’s it.