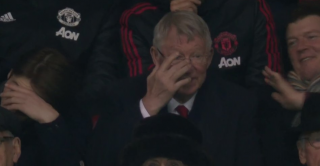 The BT Sport camera took a glance at Sir Alex Ferguson in the stands at St. Mary’s and the former Manchester United boss was seen have a chuckle.

Nobody has a clue what Fergie was laughing at, though you can sure some will claim United’s start to the match was a bit of joke.

It was but Fergie wouldn’t find that funny, and it’s great to see him in good health, back at the football.

Perhaps the greatest manager of all-time knew United would turn things around after going behind against Southampton? He was the master of comebacks after all!

That’s the only valid explanation we can think off…