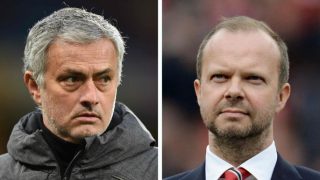 Jose Mourinho does not sound very optimistic about Manchester United’s chances of signing players in January.

Many thought United would have been busy in January following such a slow start to the season and after failing to make much of an impact in the summer transfer window, when Mourinho wanted to sign a new centre-back but got none, as per The Independent.

That saw the manager mainly opt for a defensive duo partnership of Chris Smalling and Victor Lindelof this season, though the latter could miss a large chunk of action this month after triggering a muscular injury, with the Daily Star reporting on a three-week absence.

The Swede had been performing well by United’s defensive standards of late, but Smalling’s time in a Red shirt expired a long time ago and how he remains at the club is beyond us.

READ MORE: 4-3-3: Predicted Man Utd line-up vs Saints – Lukaku back with a bang

United have won just six of their 13 league games so far this season, as they sit in seventh place and 14 points adrift of league leaders Manchester City. A win today against Southampton is much needed.

With all of this in mind, you’d think Ed Woodward and co would be busy looking for some players they can bring in over January to help Mourinho mount a top four finish…

However, based on Mourinho’s comments, the United boss clearly isn’t convinced that he’ll get many new signings, if any, as he suggests that he will be lucky to get one new face through the door. This could also be an effort to pile pressure on Woodward and other members of the board.

“Honestly, I don’t think we are going to sign,” he said, as per The Express. “If we do, I would say one player. I don’t see us doing more than that.”

Because I don’t buy it. United are big enough to attract any player. It’s down to the suits who don’t give a shit at long as the cash rolls in.

The Reds have conceded 21 goals in 13 Premier League matches so far this season – a woeful record – so Woodward shouldn’t need convincing that United need more in that department.

There are many options out there and signing the right one in January can be difficult because no club wants to lose any of their best players halfway through the season. The Metro previously reported on United’s interest in Milan Skiniar, who plays at centre-back for Inter, and he would definitely be an upgrade on any defender currently at the club.

United could also do with a new defensive midfielder as Nemanja Matic looks finished.