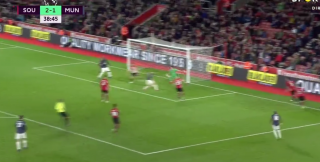 Ander Herrera has doubled Manchester United’s lead when we needed it most.

The Saints had been winning 2-0 but United turned things around quickly in the first-half and the scoreline is currently level.

The first goal for United, scored by Romelu Lukaku to end his scoring drought, was created by Rashford.

READ MORE: (Video) Lukaku ends goal drought by pulling one back against Saints

Then the Spain international went on to score one of his own to equalise for the Reds.

What a way to turn it around – before the break – but United can’t keep this up. Not only does it put additional pressure on our hearts, as fans, but it also contributes to inconsistent form.

Southampton may not be able to close out games, but other teams will…

Come on United, let’s get all three points!