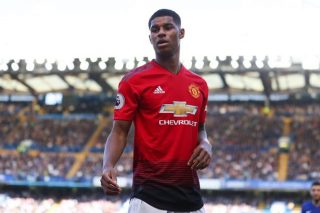 According to Manchester Evening News reporter Samuel Luckhurst, Marcus Rashford will keep his place in the team as Manchester United travel to St. Mary’s for the 5.30pm kick-off.

It remains to be seen whether Rashford’s inclusion rules the Belgian out of the starting line-up against Southampton, though it sounds like the England international will hang onto the centre-forward role for another week.

This is clearly a chance for Rashford to make the role his own. Many pundits and fans have called for the academy graduate to start more games under Jose Mourinho as it became clear he plays with more freedom for England.

Luckhurst adds that Diogo Dalot could start the game to make his Premier League debut.

It will make a pleasant difference at right-back to see a defender fulfil the role rather than a converted winger at the wrong side of his 30s. That’s not just a dig at Ashley Young but Antonio Valencia also, with Mourinho continuing to overlook the youngster in games he really couldn’t do any worse in.

Hopefully, Rashford does himself a favour today with a convincing display as well as a goal or two.

Suggestion is Mourinho will stick by Marcus Rashford today. Diogo Dalot could also start, rather than make his league debut off the bench. #mufc