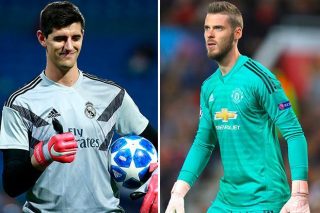 We can only imagine David de Gea is a taboo subject at Real Madrid.

Thibaut Courtois left Chelsea for Madrid this past summer, and he’s been asked to name his top three goalkeepers worldwide list.

The Real Madrid no.1, who is enduring a difficult first season at the Bernabeu, reckons it’s between Barcelona’s Marc-Andre ter Stegen, Atletico Madrid’s Jan Oblak and Liverpool’s Alisson Becker.

No mention of De Gea…

“[Marc-André] ter Stegen, Alisson and [Jan] Oblak,” Courtois said, quoted by AS. “They are all great goalkeepers, but I do not know who the best is, I think I have already shown that I am at a high level.”

De Gea is head and shoulders above these goalkeepers and the rest. Even after a poor World Cup (when the entire Spain squad flopped), De Gea has shown glimpses of late why there’s not a single goalie in the same league right now.

Manuel Neuer is another name usually mentioned in these lists but a nasty injury lay-off has seen the German overtaken by the likes of Oblak and Ter Stegen.

Liverpool’s Alisson looks a top keeper too, but to have him ahead of De Gea is truly laughable.

The Spaniard, who joined United from Atletico Madrid in 2011, had a one-year extension activated on his current contract at Old Trafford this week, as per Sky Sports, and every fan will be hoping De Gea commits long-term before it’s too late.

He’s been United’s best player for years and will be irreplaceable when the time we’re all dreading eventually comes around.

Perhaps there is some rivalry between Courtois and De Gea from their time spent together in the Premier League. They were often compared against one another, with rumours of interest from Madrid (via Daily Mail), though the Spanish giants couldn’t seal a deal for De Gea and had to settle for the Belgian.