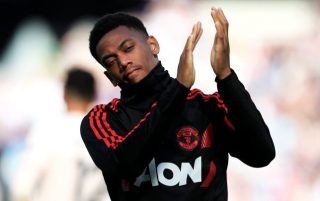 Jose Mourinho has named his starting line-up to face Southampton at St. Mary’s.

As claimed by Manchester Evening News journalist Samuel Luckhurst, Marcus Rashford keeps his place in the team and Scott McTominay gets a start.

The travelling support were excited to see Dalot in action for the first time in the league. His youthfulness, strength and pace may offer something different down the right from the bench, but we’re stuck with Ashley Young from the start as per usual.

However, it’s still early days for Dalot and we shouldn’t mount pressure on the lad. That’s more than likely the reason manager Jose Mourinho has decided to ease him in rather than start the 19-year-old more regularly in his first season at United.

Elsewhere in the team, it looks like Paul Pogba has been given a more attacking role with the midfield consisting of Marouane Fellaini, Ander Herrera and McTominay.

Both Romelu Lukaku and Marcus Rashford start, with Anthony Martial dropped to the bench.