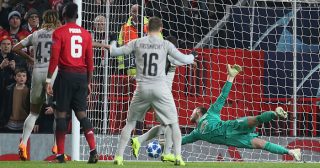 I’ve witnessed childbirth. I thought that when I did, I’d seen the human body do levels of stretching that would never be surpassed.

On Tuesday night, Dave used THAT save against Young Boys to show me what a true miracle of the human body is.

I’m small time in my mindset now. I’ve no issues in admitting that. Seeing them flounder through the group stage is close to arousing.

Having said that though, seeing them played into a position where they must beat a very impressive Napoli side to get through is a hard one to judge.

READ MORE: Babbling Brook – What it will mean if Leeds get promoted to the Premier League

Much as I really want to enjoy their European struggles so far this season, I’m gonna hold off on truly celebrating it until I know they’re as out of this particular European Union as 52% of the thick c*nts in this nation want the U.K. to be.

As a Number 10 at United, who time and time again as a player delivered huge moments in massive games, Sparky was a hero, a legend, and a player I was devastated to see leave after the way the 94/95 season had ended.

As an opposition manager, he’s a deluded narcissistic weapon that somehow makes me angrier than paying council tax.

Rarely has a man that’s achieved so little had so much love for himself and his supposed ability to do the job.

If his win rate at Southampton was the alcohol percent of a bottle of wine, you could still safely drive home after a bottle of it, yet he still believes that he’s the Messiah down there.

If we only win 5-1 once this season, I’d give up processed sugars for a year to see it happen tomorrow and see him sacked before United have everyone on the bus/plane back home.