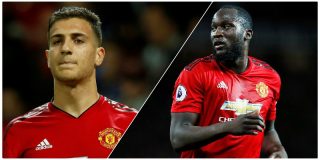 Manchester United make the long trip to the south coast and St Mary’s to face struggling Southampton and under-fire former player Mark Hughes. Affectionately known as ‘Sparky’, the beleaguered Saints boss is in a battle to keep his job after one win in 13.

United take on 18th-placed Saints in the Saturday tea-time kick off, and here is our predicted XI for the tie.

There have been positive signs for ‘Dave’ in recent weeks having kept two clean sheets in successive fixtures after his world class save against Young Boys. United have triggered a one-year extension on the Spaniard’s contract, as per Sky Sports, and he will hope to celebrate that with another shutout against goal-shy Saints.

Ashley Young was widely expected to play, but Mourinho will instead give a debut to 19-year-old Dalot who will come in for his Premier League debut. The summer signing from Porto impressed against Young Boys on his United bow back in September and caught the eye with his surging runs and crossing ability. In Dalot and Shaw, there was a lot to be excited about and United fans will get another chance to see the young duo in tandem on the south coast.

Whether he should be or not, Smalling has become an integral part of Mourinho’s central defence. There is no reason for him to be dropped for this one, especially in the enforced absence of his consistent cohort Victor Lindelof through injury. Will start. Smalling has been a virtual ever present this season having only missed the first two league games and the Carabao Cup KO to Derby. Mourinho likes him.

Who partners Smalling should be a no brainer, but it’s clear that Mourinho has fallen out with Eric Bailly and doesn’t trust him in any way. Having restored Jones to the team at the first opportunity, it seems likely that the manager will keep him in the team. United are down to only three fit centre backs with Lindelof’s lay-off, and Bailly – who has not featured since he was taken off after 19 minutes against Newcastle – will provide the cover on the bench, even though he should be starting.

Missed the draw against Palace through suspension, but will return on the south coast to face his old club. Shaw has made the left-back spot his own now, and he’s maintained his sizzling start to the season. Despite being at the club for four years, Shaw has yet to feature for United at the ground where he plied his trade before becoming Louis van Gaal’s first signing. Undoubtedly the Reds first pick on the left.

Sat out the uneventful win over Young Boys, possibly with this game in mind. He came on for Fred in the second half and is expected to start at St Mary’s. Has his critics, justifiably so, but there can be no debating that United are a better side with Pogba in midfield. Pogba delights and despairs in equal measure, his long term future is still clouded in uncertainty but, in an engine room severely lacking in spark, Pogba will again be relied upon to make things happen.

Matic has been struggling with fatigue and fitness all season, but despite the overwhelming evidence to the contrary, Mourinho has continued to stick by his most trusted lieutenant. Matic has come in for a lot of criticism, but is seemingly undroppable. He’s not even been taken off at any point during his slump in form. Personally I feel he needs to be given a breather, but you just cannot see Mourinho doing so. It looks almost certain that he will start against Southampton with Fred relegated to the bench.

Mourinho simply cannot pick Marouane Fellaini alongside Matic again here. He’s tried it and two of the slowest players known to man just can’t play together in a midfield screaming for flair and creativity. Away to a relegation threatened side, you shouldn’t need two defensive players that do the same job. Mata can drift in and out of games – an occupational hazard for the type of player he is – but his ability to find space, his set piece prowess and his intelligent link up play are hard to ignore. United are a better side when he plays. The little Spaniard is a magician and, against a Saints side that are likely to sit deep and soak up pressure, his lock-picking abilities may be the key to the door that United need.

He was the Reds best attacking outlet in the desperately dire draw with Palace and caught the eye again vs Young Boys. Like Mata, his tendency to drift to the peripheries can be frustrating, but again, like Mata he offers something different. There aren’t too many options Mourinho can turn to in the number 10 position and – with Alexis Sanchez injured – Lingard looks set to get the nod.

A striker desperate for goals and any semblance of form, it’s no co-incidence that United’s best performances recently have come without him. But when you spend £75m on a striker it’s hard to drop him. It’s a fine line with Lukaku at present – not to play him will only dent his confidence further but to do so will have a detrimental effect on the team. One goal could change his fortunes totally. I’d be surprised if he does not play

His megawatt glow has dimmed slightly after his blistering recent form plateaued slightly against Palace and Young Boys. Even so, there is no question he should start on the left (who else is there?). Martial, United’s Player of the Month for October, has done more than most to save Mourinho’s job, despite his apparently fractious relationship with his boss. According to Goal, the pair have patched things up. He remains United’s most likely match winner if he can continue to play with a good attitude. He is likely to be key to United winning this game.