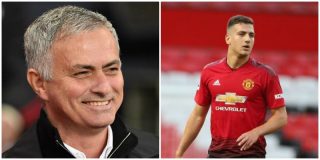 Diego Dalot is set to make his Premier League debut this weekend against Southampton.

Manchester United fans have been eager to see the young Portuguese full-back in action this season, though manager Jose Mourinho has instead opted for Ashley Young and Antonio Valencia at right-back.

The manager’s position could be explained by wanting to ease Dalot into the English game after joining from a foreign league, where he made just 8 senior appearances for FC Porto.

There’s no point rushing Dalot, who at 19 has plenty of time to make an impression at Old Trafford.

But excitement comes with a new signing and fans have understandably become tired of seeing wingers converted into full-backs at United, when there are options to start players who are more comfortable in the position.

Speaking to MUTV, Dalot opened up about his summer move to United.

“Jose was a big influence on me coming here,” he explains. “He was very important. His history speaks for itself, the way he is coaching and the way that he has made football change.

“It is the fact that he is Portuguese too. The relationship that he has with the players the very good, and it was quite impressive to me. He pushed me to come here and the way that he believed in me was very good. That is why I am here. He is a big reason why I came.”

It sounds like Dalot is enjoying his time at United despite not getting a lot of game time. He has waited patiently and it looks like the manager is ready to throw him into the line-up on Saturday against Southampton.

“The opportunities will always come,” Mourinho told the press on Friday, as per Manchester Evening News.

“Phil Jones was not playing. Lindelof got injured and Jones had the opportunity to play against Young Boys. It will happen all over the place I believe. For the other game Luke Shaw was suspended and now we have Ashley Young with four yellow cards. Who knows when the fifth is arriving?

“Players must be ready. In this case some are going away to the medical room and some are coming back. For example this weekend will be the first call for Dalot. He is ready now. He had an important injury, surgery, then a second injury in the national team when he was coming up, when he was already playing against Young Boys and Derby County, when he was almost here. But now he has been training for two weeks and we think he is ready now.”

So get yourself to St. Mary’s this weekend. A new star could be born!