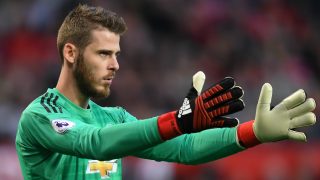 Manchester United have took up the opportunity to extend David de Gea’s deal, according to Sky Sports.

The 28-year-old is one of the best goalkeepers to play in the Premier League, with only Peter Schmeichel arguably standing in his way if such an award existed…

He joined United from Atletico Madrid in 2011 as a scrawny keeper with raw attributes, but Sir Alex Ferguson and the fans stood by him and were rewarded as he’d go on to become the best goalie in the world.

De Gea didn’t have the best World Cup campaign this summer and started the 2018/19 season a bit rusty, though the Spaniard is back to his best after pulling off an incredible save to prevent Young Boys from scoring midweek.

However, the good news is De Gea is staying put.

There have been reports, as per Calciomercato, suggesting that the shot-stopper could be on his way to either Paris Saint-Germain or Juventus, although they’ve seemingly been put to bed.

Fans were fretting about the possibility of losing De Gea with his current deal set to expire at the end of the season but, according to a report from Sky Sports News on Thursday afternoon, United have activated a one-year extension in his contact.

BREAKING: @ManUtd have exercised their option to extend David de Gea’s contract for another year until 2020, @SkySportsNews understands. #SSN pic.twitter.com/7pyggGNgSI

Then, Manchester Evening News journalist Ciaran Kelly made a claim that both parties are ‘optimistic’ about a new deal.

United and David de Gea’s camp have been ‘optimistic’ he will sign new deal. ‘Keeper’s been moved by fans’ support and his partner has relocated to Manchester. Key for United now is to prove they can match his ambition. Class act. #mufc