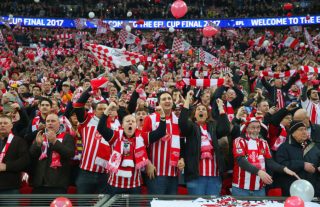 Southampton have had a terrible start to the season and it looks like they’ll end up in a relegation battle unless things pick up drastically in the coming months.

We reached out to Allen Gunn (@a_gunzy), who runs social media for popular Saints blog St. Mary’s Musings, to get a feel for things at Southampton. He doesn’t sound confident about the clash against Manchester United this weekend, but does reveal which player we should watch out for.

READ MORE: 4-3-3: Predicted Man Utd line-up vs Saints – Lukaku back with a bang

A big thanks to Allen for sending us the following. A note on Southampton…

Southampton has been a largely frustrating watch this season and that will no doubt continue against Manchester United. Mark Hughes did enough to keep us up last season but hasn’t kicked on and produced the results needed to forget about a disastrous 2017/18 and that cloud still looms overhead, with the potential to be even worse. There’s been minimal improvements outside of the consistency of a few players — the likes of Pierre Emile Hojbjerg and Nathan Redmond — and a lack of confidence in all aspects, including mentally within the squad, has been confirmed by Cedric Soares who stated it publicly after the defeat at Fulham.

It feels no matter what the players do in a game, the wheels will eventually fall off, so it is just a wait of when and how. Opponents can play at second-best or do enough to earn a positive outcome and they tend to take advantage of one or two miscues that come from little. Despite glimpses of better play, we’ve had a knack over the last two years to drop points from winning positions.

Our biggest threat in front of goal this season has been Danny Ings, but he’s been sidelined with an injury and doesn’t appear likely to factor in against United at all. Our strikers, even if in poor form, have tended to have success against the Reds’ back line so not having him will diminish Southampton’s ability in front of goal. Manolo Gabbiadini has deputised in his absence whilst 18-year-old Michael Obafemi has been given a chance to try and replicate his form for the under-23s. Gabbiadini had his best game in a Saints shirt against United in the League Cup and could possibly use that as motivation — albeit a bit late — to help lift Saints to a crucial result.

Stuart Armstrong, however, is surely one to watch. Since coming back from the international break, he’s been given a chance in the line-up and has scored twice and played a tremendous attacking role from midfield, which is something we lacked with just Mario Lemina and Hojbjerg. The former Celtic man had to wait his turn, but his impact cannot go unnoticed.

Every game becomes increasingly more important the longer that Southampton goes without a win — we last did on September 1. The three points picked up over our last five games have included two goalless draws and highlights how poor Saints are in front of goal. United presents a threat of the likes of Liverpool, Manchester City and Chelsea, who all scored at free will against Saints, and is something our fans will be wary about and hoping to avoid a big number due to the fragility of our defence.