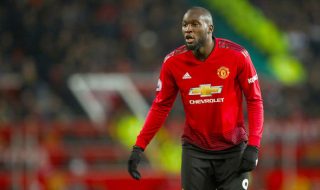 It’s not going to plan for Romelu Lukaku this season and his confidence looks shot.

He’s not alone as United’s season, particularly in the Premier League, has been unacceptable.

The Reds are trailing league leaders Manchester City by 14 points and are positioned seventh.

However, the under-fire Belgian striker was dropped last night after a dire performance against Crystal Palace at the weekend. To make matters worse, Lukaku has not scored for United since September 15.

Lukaku has scored just four goals in 16 matches this season, which can partly explain United’s position in the Premier League table considering he is our main outlet up front.

And two minutes after Lukaku made his entrance on the pitch as a substitute on Tuesday night against Young Boys, he made an instant mistake.

Much has been made of Lukaku’s poor first touch, and it was on show from the moment he came on with a touch so bad it has gone viral on social media.

See the video below.

Only Lukaku could do this ffs. Every game his touch gets worse 😭😭😭pic.twitter.com/OOQgeYo78U

It’s clear from the footage that Lukaku does well to outmuscle the Young Boys player. All he needed to do next was dribble the ball down the line, but he was misfortunate enough to trip over the ball.

I’m actually done with Lukaku touch now it’s actually a joke, geeza needs to get his timberlands off 😭🤣

This first touch Lukaku has is an actual joke.

The Reds still went on to beat Young Boys but left it late, thanks to Marouane Fellaini scoring the only goal in stoppage time. It was enough to see United qualify for the Round of 16 in the UEFA Champions League.

Fellaini’s winner got the better of manager Jose Mourinho…