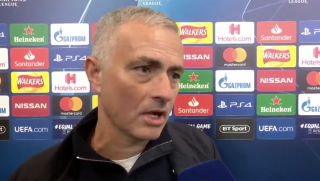 Jose Mourinho made sure he reminded everyone of his impressive record in Europe following Manchester United’s 1-0 win over Young Boys on Tuesday night.

The victory saw the Reds qualify for the Champions League knockout stages, with Juventus beating Valencia in the other Group H fixture.

It should give the lads a lift after what has been an unacceptable season domestically as United sit seventh in the Premier League and were knocked out of the League Cup by Championship opposition Derby County, currently managed by Frank Lampard.

While Young Boys should be praised for coming to Old Trafford and having a go, Mourinho’s men dug deep to ensure a late win, thanks to Marouane Fellaini scoring in stoppage time.

That was the final nail in the coffin for Young Boys, who have also lost out on a place in the Europa League which has been secured by Valencia.

“Relief,” Mourinho was quoted by the BBC when asked about his celebrations, as he smashed a basket full of water bottles on the touchline. “Frustration before that and relief with the goal.

“I was not unhappy with the players. Not at all.

“Frustrated with the fact that we couldn’t score, yes, but my players were very tired at the end and that’s what I love – I want them to be very tired.

“I have to reunite the goal we scored with David De Gea’s save. I think without David’s save, no winning goal.

“But, in the end, we qualify in a very difficult group with one match in hand, suffering a lot, but we did it.”

Mourinho then used the result and United’s qualification for the Round of 16 to stick two fingers up at the critics.

1) This is why people correctly claim Mourinho always makes it about him. 2) He only ever talks about the past these days, with good reason because his future appears bleak. https://t.co/8TiFG9oe2l

“Let me send a message to my lovers and say that I played Champions League for 14 years and I qualified 14 times,” he said.

“And the two years where I didn’t play Champions League, I won the Europa League twice, so in 16 years, 14 times I qualify and twice I play Europa League and I won.

“Just a little curiosity for my lovers and the lovers of the stats.”

However, his post-match interview didn’t go down well with former United players Rio Ferdinand and Paul Scholes, who have been voicing their views against Mourinho of late…

“It’s always ‘I’ last time I looked football was a team game.”

They do not hold back! pic.twitter.com/qpsZFDAarQ

Owen Hargreaves was also in the BT Sport studio, though he was more defensive when it came to Mourinho. Perhaps he doesn’t have a close friend — like the other two — who felt let down by not getting the United job after Louis van Gaal… (we’ll leave that for another day)

A win’s a win but we think the lads are right. Mourinho only ever takes responsibility when his teams win. Anything else and the excuses are rolled out.