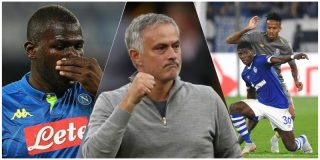 It is believed that manager Jose Mourinho is looking for alternative options to add to his transfer list should the board overrule any targets due to price or quality, as The Guardian claimed happened this past summer.

With Mourinho pressing the club to sign a new defender for the heart of his defence, the 20-year-old Brazilian has emerged as a candidate signing after impressing in his first season at Porto.

It would suggest United’s strategy in the transfer market is a mixed one considering the past summer saw them chase 29-year-old Toby Alderweireld, as per the Manchester Evening News. By signing Militao the club would be getting a young talent hopefully ready to become an elite player, whereas Alderweireld’s experience represents a ready-made established defender, with Premier League nous.

Moreover, this is Militao’s first season in Europe after joining the Portuguese giants from Sao Paulo. He must be doing something right to be on United’s radar this soon, and it goes without saying that Mourinho has contacts at Porto from his time at the club between 2002-2004 when he won the UEFA Cup, Champions League and two Primeira Liga titles.

It is possible that Mourinho has been tipped off about the emerging defender.

Castles, who is usually on the money when it comes to Mourinho related news, explains further:

“Mourinho’s argument is that his defence requires a centre-back blessed both with superior defensive skills than United’s current options and the personality and experience to lead and martial his back line.

“While the Old Trafford manager would like his club to move for Napoli’s Kalidou Koulibaly in the winter transfer window, its failure to finance moves for similar targets in the summer has led Mourinho to examine younger options.”

It seems unlikely that Napoli would let a player like Koulibaly leave halfway through the season, but it’s pleasing to hear he’s a target – and should be signed in the summer unless another club gets him before us.

Victor Lindelof and Chris Smalling have partnered one another in defence more often than not this season. However, the Swede faces some time in the treatment room with a muscular injury, and it was Phil Jones who replaced him on Tuesday night against Young Boys in the Champions League.