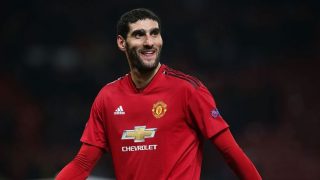 Marouane Fellaini scored the only goal in Tuesday night’s win over Swiss side Young Boys. It was enough to send Manchester United into the Champions League knockout stages.

The Belgium international’s goal came in stoppage time to register a vital 1-0 win.

Fellaini praised his teammates’ performance after the match, though fans weren’t exactly convinced by the display given the amount of opportunities wasted by United throughout the game.

“It’s always good to score a goal but, for me, the most important thing is the three points,” Fellaini told the official Manchester United website. “I think the supporters deserved that. I think that it was positive, I think the players were positive and aggressive.

“We wanted to win, we showed it and we gave everything to score a goal. We create a lot of chances and I think we deserved the win today. OK, David did a great save and they had a few chances, but I think we did everything to win the game.”

Had Marcus Rashford converted his one-on-one four minutes into the game, it may have set United up for a more convincing performance, but we’re not buying Fellaini’s optimism. Jose Mourinho didn’t look very happy on the touchline either.

The Reds just about crossed the line against a second rate side about to crash out of the Champions League, with one point from five games. It always came on the back of a dismal scoreless draw against Crystal Palace at Old Trafford – so forgive us for not jumping around the place, smashing water bottles or getting a tattoo to mark the occasion.

United are expected to beat teams like this convincingly, yet he left it very late to cross the line.

“I always try to give everything for the team whether I start or don’t start,” Fellaini added. “Everybody knows I am a team player.

“The manager has given me a lot of confidence. He trusts me. That is important for a player and I try to give it back and repay him on the pitch. I give everything for him, I feel comfortable and I am happy with him.”