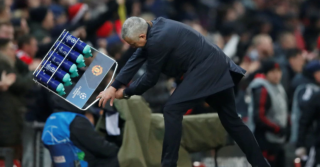 As David de Gea once more defied the realms of reasonable belief, the sickening feeling that Young Boys may well and up beating Manchester United washed over me last night.

It’s a feeling that is becoming commonplace as the seasons pass by, it was one I experienced on Saturday against Crystal Palace and the same one I’m bound to have as Southampton away approaches. And as Marouane Fellaini unreservedly fired Jose Mourinho’s side into the last 16 of the Champions League in the 91st minute, I barely celebrated. Of course I was happy to see the ball hit the net, happy United had won the game and progressed, but so strong were the feelings of anger, frustration and embarrassment no happiness could find it’s way to the surface – supporting this club has left me a shell of the man I used to be.

Dwelling on not celebrating I couldn’t help but be transported to a time where last minute goals were a source of relief and manic joy as I bounced around whatever room or seat I was sat in; A.C Milan when Wayne Rooney won it in the dying embers, Michael Owen or Robin van Persie against City, even Alexis Sanchez earlier in the campaign as the side came back to beat Newcastle, each goal was met with frenzied celebration because it meant so much to get the result.

Last night was an aberration and has received all the praise it deserves. Fault doesn’t lie with one man solely, but he is now making it very difficult to see beyond his failings.

Jose Mourinho stormed out of his post match press conference boasting at his 14 qualifications out of 14 in a style almost identical to his “football heritage” speech after the embarrassing defeat to the hands of Seville last season, as per The Independent.

No defence of his tactics, not a word on selection and no reference to the 90 minute snooze fest against a side from Switzerland. And you think to yourself “Well, at least he hasn’t thrown anyone under the bus this time”. But more must be demanded from him, in the wake of the draw with Palace, Mourinho had the temerity to say he tells his players to attack the opposition and doesn’t know why they don’t. An implication that the whole playing squad go against his wishes in an effort not to win games, that they ignore his plans to play cut-throat football on a weekly basis and it isn’t his fault. And then he started two defensive midfielders in a home Champions League game, he doesn’t stand screaming as his players pass the ball from side-to-side before humping a hopeful cross into the middle. It dawns on you that he’s satisfied with what he’s seeing.

Teams will lose games of football, they will have poor games and they will find inconsistency over the course of a season, no fan is in denial of this and no fan would ever begrudge these things from happening as a season develops because it’s how football works, what fans won’t ever accept is a side not trying to win. It is his default setting, contain the opposition and then slowly build the play and ignore counterattacks, Manchester City picked United off and would’ve scored 8 on a better day, Palace should have come away with 3 points at the weekend and last night there was a de Gea hand between victory and defeat.

Everything about it was poison, even to the point where you believe progression may have kept him in a job he blatantly doesn’t deserve to have.

The fact of the matter is, Mourinho is still employed for two reasons; 1) it’s too expensive to sack him now, and 2) there is no one available for the job. Poor results may force the Glazers hand, but while he continues to defy the odds by beating Young Boys and drawing at home, they have another excuse not to get rid and to save themselves £14m, the fee it would take to sack Mourinho, as reported by reliable journalist Andy Mitten for South China Morning Post.

The very fact that the title challenge is over in November and top four now looks unlikely, the Carabao ended when Derby swatted them aside, no-one in Europe is quaking and the FA Cup is the only potential for silverware this season should be enough food for thought, and that is without factoring in the performance levels of the players, the dross that is apparently acceptable, Nemanja Matic’s continuing involvement and the fact Lukaku seems to have turned to comfort eating to ease the pain. It’s another in a long list of problems the club is currently facing.

The day after a match I’ve still been annoyed, I’ve still been absolutely buzzing or I’ve still been a little upset, but following last night’s debacle I’m genuinely still seething. And that’s the crux of the issue now, it is becoming less and less enjoyable watching United play, all fans want is something to get excited about and to see that amongst all the shit there is a plan in place to right the wrongs of the last six-years.

With Mourinho, a man the board seem reluctant to back and recruit the players needed to become a force again, I don’t think it’s going to happen, I don’t think he is capable anymore of letting it happen. Stubbornness and arrogance will win the day, and we will be the ones to suffer. The Manager Merry-go-round isn’t something I agree with, but it’s high time United bosses shape up and buy their tickets. Last night was breaking point. The red seats proved it.