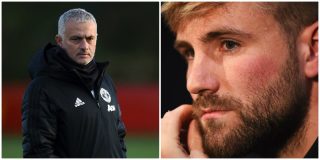 Luke Shaw claims that every player playing under Jose Mourinho needs “thick skin” but believes this Manchester United squad now needs to “fight for this manager and this club”.

Only this season has Shaw become one of Mourinho’s trusted players after making the left-back role his own. His role in the team is a significant one and it would appear their relationship, which had become almost non-existent, has improved massively since the players returned from their summer breaks.

Mourinho has always preferred players that will go to war for him. Victor Lindelof would have been praised on Saturday for playing through an injury at the very end, though now United face the consequence of being without the Swede for the foreseeable future.

The manager confirmed that his in-form centre-back will miss United’s UEFA Champions League Group H encounter with Young Boys, as per Sky Sports. A win for United should guarantee progression to the Round of 16, though we will also need group leaders Juventus to beat Valencia in Turin. The Italian giants will be eager to pick up all three points in that game in order to ensure top spot.

But Shaw’s relationship with the manager has seemingly improved, making it one of a few positives to come from Old Trafford this season.

“You need a thick skin to play under this manager and for this club,” Shaw said, as per The Guardian.

A good run in the Champions League could gloss over what has been an unacceptable domestic campaign. However, one would imagine if this side is incapable of breaking a poor Crystal Palace side down, what hope have they against Europe’s elite?