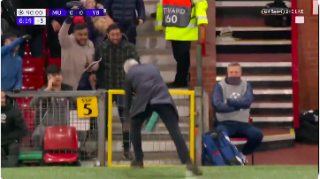 The occasion can get the better of us sometimes…

Jose Mourinho was full of emotion on the touchline at Old Trafford tonight, especially when Marouane Fellaini scored a late winner to beat Young Boys.

The win saw United qualify for the UEFA Champions League knockout stages, so it had enough significant to smash a water bottle.

And that is exactly what Mourinho did in reaction to Fellaini’s stoppage time winner. The manager has put a lot of faith in the Belgium international and has been rewarded again.

His side took all three points and have finished second in Group H, with Juventus securing top spot.

Next up in the Champions League for United is Valencia away. A nothing game for the Reds and perhaps an opportunity to see some of the younger lads make an appearance.

It beginning to look like our season now depends going on a decent run in Europe, unless we can go all the way in the FA Cup.

Marouane Fellaini to the rescue again!!!!