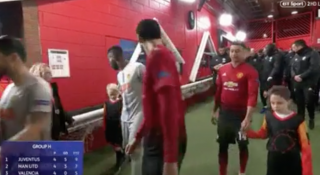 The United midfielder has a rather clumsy streak on the pitch, so it’s hardly a surprise to see him forgetful prior to the game.

Mind you, losing a mascot is not something many footballers have done before. Perhaps he will be asked to explain himself after the match should he decides to stop for journalists in the mixed zone.

While United’s midfield for the match – Fellaini, Fred and Nemanja Matic – raised eyebrows before kick-off, due to it lacking any real creative spark, the Reds have dominated thus far and have create enough chances to be ahead.

But the scoreline remains 0-0…

There’s still plenty of time to get all three points and Jose Mourinho has a number of attacking options on the bench, with Juan Mata, Paul Pogba and Romelu Lukaku all available to come on and make a difference.

Hopefully this is all a big misunderstanding and the mascot has been found.

Only Fellaini could lose a mascot before kickoff from r/reddevils