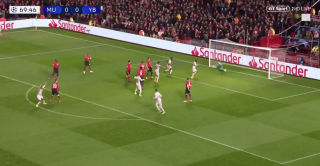 An unbelievable save by David de Gea has kept Manchester United in the game.

It’s currently scoreless at Old Trafford, but our Swiss opponents Young Boys had a great chance to take the lead.

The shot even took a deflection before De Gea, the best goalkeeper in the world, dived to his right to palm the ball away.

While it seems inevitable that he will leave Old Trafford, Manchester Evening News are already suggesting that De Gea is set to join Paris Saint-Germain once his contract at United expires.

Replacing a goalkeeper of this standard is never easy, as United learned after Peter Schmeichel left in 1999.

There’s over 10 minutes of normal time remaining… Come on, United!

Watch the save below.