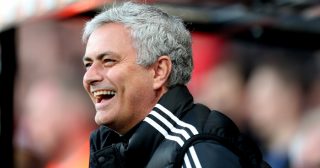 A photo of Phil Jones is doing the rounds of social media but this time it’s not making fun of his facial expressions.

Jones replaced an injured Victor Lindelof at centre-back tonight, with the Swede ruled out due to a muscular injury, as per the Manchester Evening News.

The reaction on Twitter would suggest fans were hoping to see Ivory Coast international Eric Bailly instead, but Jones hasn’t done too bad in the heart of defence.

He has also provided a funny moment in the first-half, which many will reflect on once they get over United’s missed opportunities in front of goal.

After committing a clear tackle, Jones ran himself out of play and over one of the advertisements boards. Thankfully, he didn’t go completely over and injure himself.

It would have ruled him out for the season knowing his luck!

See the picture below.

It’s a bird… It’s a plane… No, it’s @PhilJones4! pic.twitter.com/PcLARCIPkE