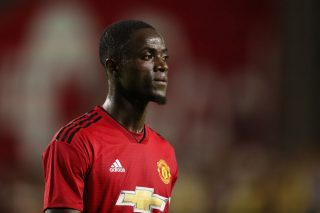 Writing on the wall?

But no… Jose Mourinho has opted to start Phil Jones instead.

The Ivory Coast international is arguably the best defender at the club, yet he cannot be trusted by the manager to play against a second rate Swiss side.

What does that say for Bailly’s future at Old Trafford?

Aged 24, Bailly knows he should be playing regular football and if he can’t get that at United, it may be time to reconsider his future at the club.

According to The Express, Paris Saint-Germain are interested in signing Bailly, with domestic rivals Arsenal and Tottenham also in the hunt for his signature.

This is what Twitter had to say about Bailly tonight.

Writing on wall for Eric Bailly? Mourinho said on Friday ‘don’t be surprised’ if he plays yet not featured since being hooked after 19 minutes vs Newcastle on October 6. Mourinho’s tended to keep CBs together lately so can see him sticking with Jones in Lindelof’s absence #mufc

I just can’t fathom the thoughts in Bailly’s head right now. Our best defender on his day now finds himself as 4th choice. Behind Phil Jones.

Mourinho’s issues with Eric Bailly date back to April and him pulling out of the West Brom game. Jones came in the next week vs Spurs and bossed Harry Kane. That period might have done it for Bailly. #mufc

I can’t believe mou isn’t playing Bailly. What a child

What does Mourinho have against Eric Bailly?

eric bailly is the best defender we have at united and he can’t get a start 😩😩😩 pic.twitter.com/opG2fxnpDy

The press should ask why he started Phil Fucking Jones ahead of Bailly after the match lol.