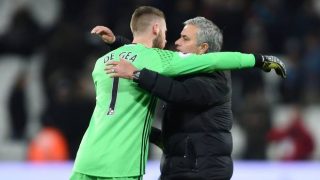 Not only did Manchester United’s 1-0 win over Young Boys see the Reds progress into the Champions League knockout stages, manager Jose Mourinho has confirmed that David de Gea wants to stay at Old Trafford.

De Gea has an important role to play in United’s win, as he dived to his right to make an incredible save while the game was scoreless.

His future has been up in the air of late. The Daily Mail recently stated that De Gea is set to become the world’s highest paid goalkeeper… at Paris Saint-Germain, who are allegedly willing to offer him a whopping £300,000-a-week.

Though it seems now Mourinho is confident enough to rubbish those rumours.

Mourinho on De Gea: ‘We have the best goalkeeper in the world and I know he wants to stay, I know his agent is happy to do what the player wants.’ #mufc

It will be considered a masterstroke if United can tie De Gea down to a new deal.

Considering we are going through a rather bleak era without any real success, De Gea knows he could move elsewhere and win title after title, but he seemingly would prefer to stay and help United progress.

However, the road to progression is a long one. The Reds are miles off Europe’s elite but at least we get to challenge the best by reaching the Champions League Round of 16.

Fingers crossed Mourinho is right and De Gea puts any doubt surrounding his future to bed.