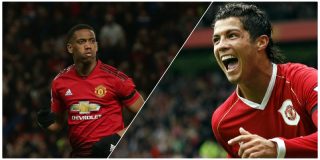 In an interview with Manchester United’s official website for United Review, Anthony Martial reveals the club he supported growing up and the footballers who have inspired his career to date.

While his preferred team as a child was Lyon, a club he would later join as a academy player, Martial also followed English football.

“Manchester United because Patrice Evra was there and he comes from the same town as me,” Martial explained. “I followed Arsenal as Thierry Henry was there, also from Les Ulis.”

Still only 22-years-old, Martial has been in terrific form of late and will undoubtedly become a role model for children who dream of becoming footballers, the same way he looked up to the likes of Zinedine Zidane, Karim Benzema and Juninho Pernambucano.

Martial adds how he would watch fellow strikers and try reproduce what they were doing whenever he played.

“I would watch every striker on the internet, and sometimes, right before a game, I’d be by myself watching action clips, so I’d be able to reproduce what they were doing in those videos.”

He also went on to praise Cristiano Ronaldo and one of his current teammates at Old Trafford.

“He [Ronaldo] was incredible. He is incredible. I only admired players who dribbled the ball and he did just that. He would put on a real show. To tell you the truth, he got me dreaming that one day it could be me.”

And, it could be Martial as long as he agrees to fresh terms at the club. The Guardian quoted the France international’s agent during the summer, stating that his client wished to leave Old Trafford, though United have no given up on persuading him to sign a new contract, as per Manchester Evening News.

“If I was a kid of 14 today, who would I admire? Current players today? For me, I think it would have to be Juan Mata. He is class personified.”

In another recent interview on ManUtd.com, Eric Bailly was asked about his teammates and revealed that Mata’s nickname around the club is The Wizard. The Spaniard is clearly a big hit with the other players and we can only hope – along with Martial – he signs an extension before his contract expires at the end of the season.