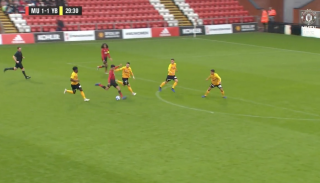 Mason Greenwood continues to make a name for himself in the U19 edition of the Champions League. The Manchester United youngster netted a brace against Young Boys, which included a cracking solo goal.

United clinched top spot in Group H with a 6-2 win over the Swiss side.

The first goal saw Aliou Traore pick up possession in a dangerous area thanks to an individual error. The former Paris Saint-Germain youngster then squared the ball across the goalkeeper to Greenwood, who converted easily.

United’s second completed a brace for Greenwood. The exciting striker cut in from the left to distance himself from any Young Boys player before carefully slotting his effort past the goalkeeper from outside the box.

Aidan Barlow, Tahith Chong, Dylan Levitt and D’Mani Bughail-Mellor also got their names on the scoresheet.

Considering United are struggling to score goals this season, Greenwood’s rise to prominence may be coming at the right time.

Romelu Lukaku is miles off his form of last season and Mourinho’s men have become reliant on Anthony Martial to provide the goods. It will be interesting to see how the first-team gets on tonight against a Young Boys side that has conceded 10 goals in four Champions League matches this season.

Watch each of the goals below:

However, much of the talk on social media has been about Greenwood, who is exciting United fans at the moment.

Mason Greenwood should be transported straight from Leigh Sports Village to Old Trafford for tonight’s game. Doesn’t even need to take his boots off #MUFC

Wish Mourinho would grow a pair and bring Mason Greenwood into the first team, the lad is on another level.

2 more goals for Mason Greenwood in the first half, what does he have to do to earn a first team call-up, oh wait our manager does fuck all for youth stars unless he’s called Scott Mcmayonaise #MUFC #MUAcademy

Mason Greenwood upfront on the weekend, anyone? #MUFC

Get mason greenwood to the first team!!!! #MUFC 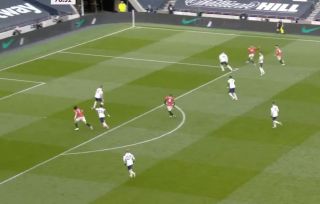