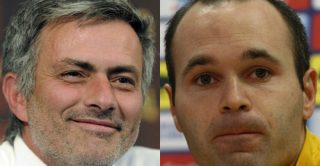 Spanish football icon Andreas Iniesta has took a swing at Jose Mourinho for creating an unbearable atmosphere between Barcelona and Real Madrid.

The former Barcelona midfielder left the Nou Camp at the end of last season and is currently in Japan playing for Vissel Kobe.

Before Mourinho returned to Chelsea, he managed Real Madrid where things became a bit heated. Pep Guardiola was in charge of Barca while the current Manchester United manager was in the Bernabeu hot seat between 2010-13, and Iniesta felt he contributed to the rise of hatred between the La Liga rivals.

Speaking about the Barca-Madrid rivalry, Iniesta told La Sexta, translated by Goal: “You don’t have to be for Barcelona or Real Madrid to know that the situation was unpleasant.

“And the key component in that story was Mourinho. Whoever doesn’t want to see that, is radical.

“You didn’t see the rivalry that always existed before, it went beyond that, you saw hate. That atmosphere developed and it was unbearable.

“The Barca-Madrid tension caused by Mourinho did much damage to the national team [Spain] and the teammates.”

However, Mourinho was not Real Madrid manager when Luis Figo, who had transferred from Barcelona to Los Blancos, returned to Camp Nou and had a pig’s head thrown at him whilst taking a corner.

That proves this fixture has always a been a heated rivalry – for reasons that have little to do with football, therefore, it seems unfair to blame Mourinho for bringing the worst out of both teams.

As a spectator, it adds to El Clasico. Nobody wants to see a mellowed rivalry.