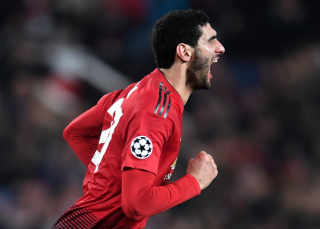 There’s a lot to like about Marcus Rashford, but there can also be no doubt that he has regressed and his finishing — or lack thereof — has become a serious concern. Missed a sitter in the first-half when it seemed easier to score and his final ball continues to evade him. United should have been 3-0 up by the break and Rashford squandered two gilt edged chances.

I love it when he drives at people and causes problems, but his confidence in front of goals seems to have vanished. It’s got to the point where, for all his undoubted talent and his bursts of positivity, his profligacy is costing us. He couldn’t finish his dinner. The first half was Rashford in a microcosm. Bright, good movement, trying but falling short. You can’t pin the decision-making on Mourinho. Though some will doubtless try to.

Jose Mourinho does himself no favours by persisting with his favourites

What does Eric Bailly have to do to start? In what world are Phil Jones and Chris Smalling better than the Ivorian. It could well be that Jose Mourinho is saving him for Southampton away, but he certainly didn’t help himself by bringing Phil Jones back at the first opportunity he got. Whilst Bailly cannot get a look in, Matic continues to keep his place despite doing nothing of note for ages. There are many things about Mourinho that annoy me, but his cardinal sin is that he has his favourites who he persists with every week. How is Nemanja Matic keeping his place and why did we need two central defensive midfielders at home to Young Boys?

Fred impresses on his return to the team

We’ve been crying out for the Brazilian to make something happen in midfield, and he was – along with Anthony Martial – the most eye catching of everyone in Red. Criminally under-used so far. It’s no co-incidence that he was at the heart of everything creative United did, especially in the first half. Went close to scoring himself and has proved why he should be starting every week. Every time he’s played I’ve been impressed with him. It’s just a shame Mourinho does not agree.

United won 3-0 in the reverse fixture in Bern, a fixture notable for Diogo Dalot’s dynamism on debut. That night, in the Portuguese and Luke Shaw on the opposite flank, United had two young full-backs who bombed on and whipped crosses in. Here, Shaw linked well with Anthony Martial on occasions, but a combination of missed chances, wasteful passing and resolute defending ensured that Man Utd struggled to penetrate Young Boys for long periods. Having left three of his biggest attacking weapons on the bench, even the introduction of Messrs Romelu Lukaku and Paul Pogba did not have the desire effect. £174m of attacking talent failed to break down the equivalent of a League One mid table side. Marouane Fellaini’s ugly goal did the job…

Man Utd leave it late to squeak into last 16…. just

In front of a sparsely populated Old Trafford, United were headed for a goalless stalemate and a winner takes all showdown in Valencia on Matchday Six. We didn’t get the performance despite a bright start, but probably just about merited the win. It wasn’t pretty, it was ugly, but Marouane Fellaini, as he’s done so many times before, made a difference late on with a nice finish in stoppage time. It sent us into the last 16 and avoided that nervy jangling denouement at the Mestalla that many had predicted. Even so, can anyone really make a case for us winning this competition? We’ve done well to get out of a tough group, but may well have hit our ceiling now. Three points is three points. It’s enough to get us through and that’s ultimately all that matters. United were indebted to a superb David de Gea save with the match finely poised.