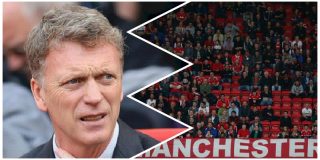 David Moyes will never get over how Manchester United got rid of him after 10-months.

It was a disaster appointment from start to finish, so much that we didn’t need hindsight to tell you that in 2013 following Sir Alex Ferguson’s announcement to retire.

Ferguson decided to give Moyes the job, as per The Express, which left many Reds in disbelief. We will never truly understand how a manager with no success at the highest level was given the biggest job in football?

Moyes shouldn’t be criticised for taking such an opportunity. He was right to try his hand, but United made a big mistake, and that was arguably the right time to give Jose Mourinho the job. Instead he would return to Chelsea and win the Premier League again in 2014/15.

But Moyes doesn’t like to take any responsibility for his failure at Old Trafford – even though he’s failed at other clubs since then – and prefers to whinge about not being given more time to make things right.

“Do I feel I should have been given more time? Of course I do,” Moyes told talkSPORT. “To go to a club like Manchester United and follow someone like Sir Alex after the time he had been there, to stay for 10 months…

“It couldn’t be a revolution at Manchester United, it had to be evolution. It had to take time. I wasn’t going to come in and change all the things Alex had done, but there were a lot of things that had to be changed at the club.”

Maybe he’s right, but he wasn’t the right man to change those things.

Louis van Gaal and now Jose Mourinho have been tasked to fix the ongoing struggles at Old Trafford, but the Scot rightly states he wasn’t the only problem at United. The departure of both Fergie and David Gill has seen Ed Woodward and the Glazers stamp their presence over the club more than even, and it’s clear to see that they prioritise commercial growth over improving on the pitch.

“You look at the way Chelsea and Man City had been doing things and changing things along the way – Manchester United had been winning because they had a special manager and a special group of players. But when that all changed, it was going to take time to find its way.

“I still think they’re having difficult times at the moment.”