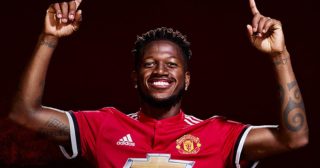 Jose Mourinho has named his starting team to face Young Boys in the UEFA Champions League at Old Trafford.

In the reverse fixture, the Reds ran out 3-0 winners at the Stade de Suisse with Paul Pogba scoring a brace and Anthony Martial scoring the winner.

It should be easier at home but you never know what you’re going to get with this United team, especially at home. Just last weekend we struggled to break relegation battling Crystal Palace down, and the game finished 0-0.

That’s not good enough and the lads should respond tonight by hammering Young Boys.

The Reds may qualify for the Round of 16 tonight with a win, as long as Group H leaders Juventus beat Valencia.

Mourinho has opted for the following line-up:

The Portuguese tactician makes some changes from the side that was held to a disappointing draw at the weekend. New signing Fred is back in midfield, replacing Paul Pogba, and Marcus Rashford is handed a start.

Even with Victor Lindelof ruled out with injury, Eric Bailly has been overlooked by Mourinho again. Instead Phil Jones replaces the Swede in the starting eleven.

Meanwhile, Antonio Valencia returns to his right-back role and takes back his captain’s armband.