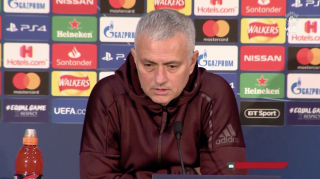 We all have our opinions on where Manchester United need to improve. Some argue the defence, others want more force in midfield and goals up front.

Then getting the best out of his players would be a good starting point. Take a look at Tottenham Hotspur, who didn’t buy a single player in the summer, yet they’re still able to compete after beating Chelsea on Saturday.

United have significantly more financial strength than Spurs – so much that it goes without saying – so if things were going to plan, perhaps the board would be more willing to back the manager in the transfer market?

I’m not defending the board because this is a collective issue, though Mourinho should be getting more out of this group of players. Even his reluctance to play Brazil international Fred speaks volumes.

And, that leads us onto the area Mourinho has identified as United’s weakness.

“Our midfield is not normally aggressive in the fight for second balls,” Mourinho said, as quoted by The Mirror, during his pre-match press conference ahead of the Young Boys clash.

Mourinho wanting more aggression in midfield may explain his decision to hand Marouane Fellaini a bumper contract this past summer, but pace and agility is needed to win second balls too, and the Belgian international has the mobility of an elephant and is as slow as a snail.

The more we hear from the manager, the more excuses we hear.

He never takes responsibility and the least we should be asking for right now is for him to get the best out of his players. It’s going to be a long season.