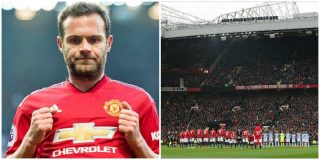 Juan Mata has stated the obvious by suggesting Manchester United need to make Old Trafford a place for opponents to fear again, when it truth that hasn’t really been the case ever since Sir Alex Ferguson retired in 2013, bar last season.

It’s going to be hard to make Old Trafford a fortress again considering the owners and board seemingly only care about maintaining the club’s commercial growth rather than improving on the pitch.

For instance, there are stories doing the rounds that Chris Smalling may be getting a new contract, as per Sky Sports, when United should aiming to buy a world-class defender instead. But it’s cheaper to stick with mediocrity, right?

United’s home form this season has been abysmal – winning just three of their nine games at Old Trafford and scoring just 10 times.

READ MORE: Video: Cantona’s best goals for Man Utd, 26-years on from the day he arrived at Old Trafford

However, last season the Reds won 21 of their 26 matches at home beating Liverpool, Chelsea, Tottenham and Arsenal in the process.

Mata wants to make opponents feel fear when they come to Old Trafford ahead of Tuesday night’s Champions League clash with Young Boys.

“It’s really key for us to make Old Trafford a fortress, to make it very difficult for our rivals,” said Mata, as per The Mirror.

“When they come to Old Trafford, ideally they will feel that it is very difficult to play here.

“We have a run of home games now and we need to try and win all of them and make Old Trafford that fortress.

“It’s our home and hopefully we can have good results in the weeks ahead.”

A scoreless draw at Old Trafford on Saturday against relegation battling Crystal Palace saw the Reds put in another dire performance. It marked Mata’s 200th appearance for the club and he believes manager Jose Mourinho should put the disappointment behind him and focus on Young Boys.

“Still feeling bitter from drawing against Crystal Palace at Old Trafford, but we’re already focused on our game against Young Boys,” he wrote for his blog via juanmata8.com.

“Obviously I would have liked to have been able to say something else, believe me, but the only way to get over a disappointment is to keep moving forward and in our case our next chance to do so is in a matter of hours.

“We have a key game for moving towards our objective of progressing in the Champions League.

“We want a win to take us into December, which is without doubt the busiest month of the year with eight games.”