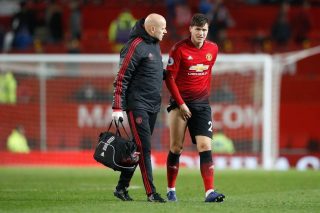 Jose Mourinho spoke to the press on Monday ahead of Manchester United’s UEFA Champions League clash against Young Boys.

The journalists in attendance were quick to ask the boss about Victor Lindelof’s injury after the Sweden international played on through an injury on Saturday against Crystal Palace.

While we appreciate the dedication show by Lindelof to play through an injury in the dying moments of a game, it may have affected the centre-back long-term and he’s just entered a stage of top form.

Mourinho may have to look to Eric Bailly or Phil Jones tomorrow night when Young Boys come to Old Trafford, though it’s the Ivorian who really should be getting the nod.

But whoever gets the nod, United are facing a side that shouldn’t threaten them but the same was probably said on Saturday when Crystal Palace held the Reds to a scoreless draw.

Anyhow, back to Lindelof, who United may miss over the Christmas period.

“Victor has a proper injury that will keep him out for quite a while,” Mourinho said, as per The Sun.

He added: “No, he does the scan tomorrow.

“If we have him for the Christmas period, when we need as many as possible, it will be good.”

JM adds more on Lindelof: “He has a scan tomorrow but the doctors and him feel it’s a muscular problem. I would say if we have him for the Christmas period it will be good.”

The last thing we need now is another defensive injury.