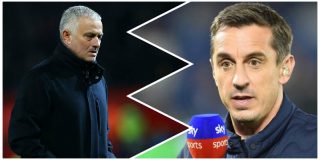 It doesn’t take a rocket scientist to figure out Manchester United are inconsistent this season, but Gary Neville is right that this is becoming an unacceptable season.

It was another dreadful performance at the weekend against Crystal Palace, ending as a scoreless draw against a side likely to be a relegation battle, with United playing slow, predictable and unimaginative football.

Neville still thinks Mourinho was right to say United could make top four before the game, but he states that this team’s inconsistency is the reason they won’t be in the running for the Premier League title.

Last season, United finished runners up to Manchester City – 19 points adrift of the champions. The Reds are currently seventh with City on top of the table with 14 more points. In November that’s unacceptable.

“I didn’t go to Old Trafford but I spoke to people who did. There’s a lethargy, in terms of the fans going into the ground, watching the game, players on the pitch,” he said on the Gary Neville podcast, as per Sky Sports.

“I think Jose gave the right message before the game saying they will end up in the top four. I don’t think it would have been acceptable at the start of the season, and certainly the start of last season, to say the top four is achievable, because he will have wanted to challenge for the title with the money that has been spent. That’s where United need to be.

“But they’re not near that level at this moment in time, and it typifies really what they are at the moment, which is inconsistent. You can see them go away to Chelsea and nearly win, go away to Watford and Young Boys, and sometimes you can watch them at home against Wolves or Crystal Palace or Valencia, and they’re nowhere near.

“They’re inconsistent, not just in games, but from half to half within games. It’s not right obviously at this moment in time, the players are not performing anywhere near their level.

“You’d argue Jose at this moment in time will be scratching his head about which players to put out on the pitch.

“But he’s made changes before and it hasn’t really made any difference so it’s just about battling and fighting away at it, because it is a struggle. I think that’s the word to describe it.”

While Neville is right to reference the money spent in recent years, he doesn’t mention the awful standard of recruitment at United. It’s clear from that we have no sense of direction when it comes to recruiting a new manager or players.

See Fred as a recent example. The Brazilian cost the club £52 million this past summer, as per The Guardian, but spends most weeks on the bench – even when fellow midfielders are out injured, which happened against City at the Etihad.

That’s a whopping fee to spend on a player to come in and warm the bench. And, it’s not as if he has been giving many opportunities under Mourinho this season, with WhoScored counting just six appearances in the Premier League this season.

Along with being inconsistent, Mourinho or whoever decided to sign Fred and other players for the matter, seemingly did so in the dark without any vision.

United are a hard watch this season. You don’t really know what you’re going to get but more often than not, it’s going to be lacklustre display.