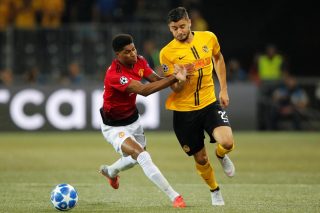 Manchester United are back in Champions League action on Tuesday night with the visit of Young Boys.

A win for Jose Mourinho’s men should be enough for the Reds to progress to the Round of 16, granted Group H leaders Juventus beat Valencia in the other match.

Mourinho needs to ask himself how will he get his current crop of players playing consistently and beating teams they should be cruising against, like Crystal Palace at the weekend. The scoreless draw saw another lethargic display from United and yet again they looked clueless in attack.

It’s hard not to point the finger at Mourinho when United’s attack lacks direction in most games. And, had Anthony Martial not hit peak form recently, this would have been more blatant. United rely too heavily on individual brilliance and lack team understanding.

Below I have predicted a team that just might entertain the Old Trafford faithful on Tuesday night, even if that’s too much to ask for at the moment…

Victor Lindelof has been ruled out due to injury and should be replaced by United’s best defender, Eric Bailly, even if Mourinho has dropped the Ivory Coast international over a significant period of time. And, if the manager truly wants to start the game by going for it, as he alluded to in his pre-match press conference on Monday, starting Dalot and Shaw on either flank will boost the team with attacking flair.

JM adds more on Lindelof: “He has a scan tomorrow but the doctors and him feel it’s a muscular problem. I would say if we have him for the Christmas period it will be good.”

In an ideal world, Matic wouldn’t feature in the above predicted starting eleven because he’s past it. Though the Reds haven’t got an alternative option with Stretty News reliably informed Andreas Pereira is not expected to feature under Mourinho again. United’s forgotten signing from the summer, Fred, is a risk taker and the team lacks a player of that nature.

Why no Lukaku? If that’s a genuine question, I’d suggest re-watching his performance against Crystal Palace. He had the same first touch as a pinball machine and just wasn’t at the races. Rashford can’t do any worse and I prefer watching United attack teams with pace. His inclusion makes up for Mata lacking in that department, but the Spaniard could be a key figure to unlock Young Boys’ already questionable defence after conceding 10 goals in four UEFA Champions League games this season.