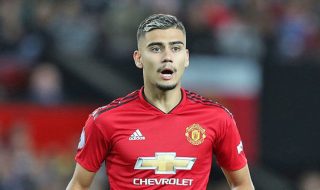 According to an exclusive by The Mirror, Manchester United’s Andreas Pereira could make a Premier League switch in January.

The Brazil international looks set to see his contract expire at Old Trafford in the summer, but his brief spell in the starting line-up at the beginning of the season has come and gone.

A source close to the player recently told Stretty News that “as long as Mourinho is in charge, Andreas is not going to get games.”

There is a feeling around Old Trafford that Pereira has not quite matured enough given what is expected of a soon-to-be 23-year-old.

While there’s likely to be interest from elsewhere in Europe, The Mirror focuses on Arsenal and Chelsea as admirers, with Pereira apparently having “his heart set on staying in England.”

“The fee is likely to be an initial £10m but may rise to double that with performance-related add-ons.”

Pereira came through United’s academy as a promising talent. He’s been on loan in La Liga with Granada and Valencia, though he overruled Mourinho’s decision by leaving last season for the latter, as per The Independent.

SN understands that Pereira was heavily influenced by his father, Marcos Antonio Pereira, when he joined Valencia on loan.

While Mourinho may not rate Pereira, surely it would be a better idea to sell him to a foreign club rather than a domestic rival?