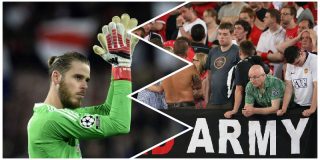 Honestly, this is one report we never wanted to cover.

The Sun claim Manchester United are ready to sell David de Gea next summer for £75 million. They also suggest Juventus are leading the race to sign the Spanish no.1 after his one-year extension is triggered by United until 2020.

However, the Daily Mail are bigging up Paris Saint-Germain’s interest in the world-class goalkeeper, by stating the club is set to make a sensational move to make him the highest paid shot-stopper in world football, earning approximately £300,000-a-week.

Replacing De Gea is a topic for another day but, put it this way, I wouldn’t like to be held responsible for finding United’s next first choice goalkeeper. Our over-reliance on De Gea down the years has been massive, and it’s telling that he’s won four Player of the Year awards since signing for the club in 2011.

READ MORE: Mourinho orders Man Utd to sign £50m-rated Premier League target, but what if his time as manager is cut short?

That should be enough to suggest our current goalkeeper is our best player, though in the history of this great club, has that ever been the case?

De Gea has won just one Premier League title since joining the club, as well as an FA Cup, League Cup and Europa League.

But a goalkeeper of his quality should be in teams winning more domestic titles and going all the way in the Champions League.

It was thought that Jose Mourinho’s appointment in 2016 would bring that, yet United are still a million miles away from competing with rivals Manchester City or the rest of Europe’s elite. (Don’t be fooled by the great night we recently had in Turin)

Days like today will cost us De Gea too. By the week his reluctance to sign a new contract becomes more comprehensible. United are a club without a plan on the pitch. Only on the commercial side.

The future looks bleak when there’s talk of our best player moving on because we’ve settled for mediocrity on the pitch.