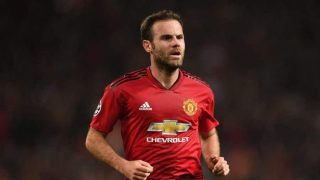 There are a number of contracts set to expire at Manchester United and one of those belongs to Juan Mata.

After joining Manchester United in January of 2014, Mata could potentially leave Old Trafford on a Bosman deal at the end of the season.

The 30-year-old has been linked with a move back to London where Arsenal are said to be interested, as per The Sun.

However, The Mirror are now reporting that United want to tie Mata down with a new deal to keep him at the club until 2022.

While it could be argued that Mata has failed to replicate his Chelsea form at United, it should be said that few signings of the post-Sir Alex Ferguson era have made as much an impact on the pitch as the Spaniard, and losing him to a rival such as Arsenal would be considered a blow.

He has produced some great moments in a Red shirt. The brace at Anfield tops the lot, but that free-kick in Turin earlier this month was also special.

After making his 200th appearance for United this weekend, it would be nice to see Mata extend his stay at United rather than joining Arsenal.

RECOMMENDED: Watch Lazio vs AC Milan on TV or online – a chance to keep an eye on Sergej Milinkovic-Savic and others.