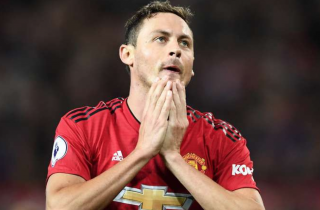 Manchester United were underwhelming again and lost more ground on the chasing Premier League pack after a lacklustre stalemate with Roy Hodgson’s tenacious Eagles. In the Reds’ first Old Trafford tie for three weeks, there was little to get excited about. Both sides had a goal ruled out in an evenly contested game that only livened up in the closing stages.

Here we run the roost over a United side who applied late pressure but failed to break down a resolute and resilient Crystal Palace side. Overall it was a very disappointing performance.

Generally a quiet afternoon but was forced to make a good double save after the break to deny Cheikou Kouyate and Patrick van Aanholt on the follow up. Palace had more than their fair share of chances but most of them drifted harmlessly wide from distance. His team-mates toiled, but it was at least only a second clean sheet of the season for ‘Dave’.

Why? Has to be one of the worst signings in Man Utd history. Run ragged by Wilfried Zaha. I know Luke Shaw was suspended but what was the point in buying Diogo Dalot if this guy gets in ahead of him. How Darmian still plays for us is beyond me. Useless.

Just so average. Helped the defence to a clean sheet but just poor. A new contract of £120,000 a week is absolutely ludicrous. Wasn’t terrible but will never be good enough for Man Utd.

This lad has been one of United’s best performers of late. Got caught napping by Andros Townsend a few times but better than Smalling and gets a bonus grade for soldiering on bravely when he picked up a late injury – even winning a tackle and starting an attack on one leg.

Underwhelming and another player who has done nothing to warrant a potential new contract. To be fair, he was always going to start with Luke Shaw suspended for this game. United badly missed the pace and penetration of the absent full-back.

He must be immense in training to keep getting picked despite continually under-performing. Wasn’t as bad as he was against City and came to close to scoring but is doing nowhere near enough to justify his inclusion. This was a tie in which United were crying out for creativity and guile. Matic was a passenger again.

There’s no question that this Man Utd side are a better team with Pogba in it, but on his return from his injury he was virtually anonymous. Had the odd moment of magic but nowhere near enough. Was it merely a co-incidence that the Reds only started to apply any semblance of pressure when he was taken off with 20 minutes to play.

Drifted in and out of the game. Worked hard and gave 100% as usual, he went close to scoring late on only to be denied by Wayne Hennessey. Tried to make things happen but to no avail. Hit his peak around this time last season. Lingard is a decent squad player but isn’t good enough to be starting week in week out

The likeable and in-form Spaniard had his quietest game for a while in the most congested area of the pitch. Didn’t get a chance for any set-piece magic, and lacked the creative spark that has changed  game in recent week. Got hooked after an hour.

Again, a bit like Lingard, United’s red hot Frenchman only showed his best form in flashes. Had the odd moment but – searching to score in a sixth consecutive league game – was well, er, marshalled, by his young opponent Aaron Wan – Bissaka. Had a couple of chances and was probably the team’s best player (although that’s not saying much).

Still disappointing, but marginally better from the Belgian. Had a late chance saved, but remains a shadow of the 28-goal player he looked for large parts of 2017-18. Linked well with Martial fitfully, but Palace didn’t struggle to contain him.

Jose Mourinho’s first go-to option – bereft of his most outstanding feature in his hair. Came on to presumably try and cause chaos from set-pieces but was ineffective. Did little.

He shone for England during the international break, but looks a totally different player at United. Put a late chance wide and didn’t make any discernible difference.

One word: Ineffective. In many ways, the Chilean epitomises United’s collective toil.