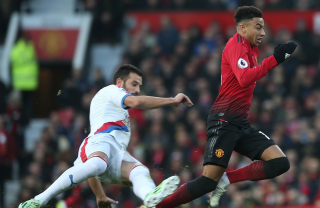 On paper it goes without saying, though that doesn’t matter because we’d batter most teams on paper.

While Roy Hodgson’s men had the best chance of the half, an effort sent wide by Patrick van Annholt, United had enough opportunities to be ahead at half-time which made the first half a frustrating watch.

You guessed it… The match remains scoreless.

Mourinho was seen shouting at his players 15 minutes before the half-time whistle. We can only presume he was feeling edgy with United being so open at the back and how this bunch of players can’t put a poor Palace side to bed…

It’s perfectly reasonable to expect more from the manager and this group of players. Palace at home should be a straight forward win but we keep falling at the final hurdle.

Jesse Lingard has been United’s liveliest player so far and his partnership with Paul Pogba looks like something Mourinho should aim to work on.

Meanwhile, it hasn’t been a good day at the office for Anthony Martial, who is looking to score in his sixth consecutive Premier League game. He had a chance to open the scoring at the start before Wayne Hennessy collected the ball cleanly.

Just before the referee blew his whistle for time, Kouyate had a goal called offside. It was the right decision.