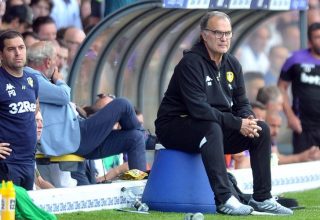 I saw a Fellaini interview earlier in the week on Sky Sports where he said United weren’t far away from City.

He’s been away from Merseyside for 6 years now, so it’s quite remarkable that he’s still as incredibly gifted at denial as those he lived among for all his years at Everton.

City rarely hit third gear that Sunday at the Etihad, yet they wiped the floor with us throughout.

Seriously… my only comparison I can give it at the minute that might make sense to his Scouselike mind is this.

If you were comparing the top 4 to members of The Beatles. City are truly the John Lennon of it by some distance. We’re struggling to justify comparison with Ringo Starr most match days this season.

It’ll be a glorious time to be a fan of Premier League football if they maintain their early season form to actually achieve promotion.

We’ve had a few years of rather bland sides promoted. Sides who have a very modest and placid following that treat visits to places like Old Trafford as a trip to Euro Disney or Thorpe Park.

Leeds fans are a different breed to that. They don’t come to Old Trafford for selfies and tourist happiness, they’re here to sing the songs of angry b*stards, and smash toilets like the porcelain has said their mams are slags.

The Premier League will be a better place for the return of this unique level of angry little d*ckhead.

He was a diving, whiny d*ckhead that wound me up every time I watched him.

Built like an absolute sh*thouse, but cheated like an even bigger one! Everything about him made me want to hate him with a passion when he used his talents to fire Chelsea to various glorious moments in his time there.

Since he’s left though, and I’ve just looked back at the moments where he delivered at Chelsea, I have to hugely love the guy if I stop watching his performances through bitter eyes.

No flat track bullying to his time at Chelsea. Yes, he might have looked incredible with all the times he got 4 in a 8-0 thrashing of a poverty side, but when the big moments in big games came, few delivered as often as this guy. For that he truly deserves to be remembered as an absolute legend of this league.

If there’s a point to it, it’s harder to find than the clitoris.

If you fancy a bit more entertainment… click the link below