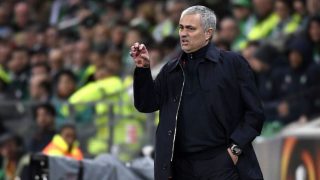 In the past, the Manchester United manager has publicly stated some of his players to point a few of them were linked with moves away from the club.

Anthony Martial was one of them. His agent admitted during the summer that his client wishes to leave Old Trafford, as per The Guardian, but the Frenchman has turned his career around this season by hitting top form and earning a place back in the starting eleven.

However, Martial is still not exempt from the odd dig…

In an interview with Univision, translated by The Metro, Mourinho bemoans the culture of young footballers and criticised Marcus Rashford, Jesse Lingard, Luke Shaw and Martial for lacking ‘character’ at United.

‘They are spoilt kids now, the kids of today have a different life, an easier environment and I’m talking about the people around the players,’ Mourinho said.

‘These people give them too much affection and too many excuses. People mature much more slowly now.

‘We’re talking about Luke Shaw, Martial, Lingard, Rashford – young, big potential, but at the end of the day it results in the word I cannot say, but you use it a lot here … character, personality, they lack a little.’

There is a growing sense that modern footballers need to be mollycoddled. If that’s the case, Mourinho going against the idea will only result in players turning on him. Given how Martial and Shaw have been performing of late, did he really need to come out with a dig towards them?